Joe DeLamielleure, the ninth of ten children, was born into a hard-working Irish Catholic family, the first to attend college. At St. Clement, in Center Line Michigan, he was proficient in Football, Basketball and Baseball, and heavily recruited by colleges. Yet his choice was clear:  Coach Duffy Daugherty was a devout Catholic. He chose Michigan State, where he received a scholarship and was subsequently named All-American.

“DeLamielleure’s NFL career spanned 13 years as an offensive lineman with the Buffalo Bills and Cleveland Browns and was selected to the Pro Bowl  6X and 6X was selected as First Team All-Pro. He was perhaps the central figure in the “Electric Company,” the Bills’ offensive line that paved the way for O. J. Simpson to rush for 2,003 yards in 1973, the first player ever to break that barrier, and the only player ever to do so in a 14-game schedule. DeLamielleure was named to the Pro Football Hall of Fame in 2003 and was inducted to the East-West Shrine Game Hall of Fame in 2007. In 1975, he was named by the NFLPA as Offensive Lineman of the Year.

In 1973, he was Co-Offensive Linemen of the Year as awarded by the 1000 Yard Rusher Club, Columbus, Ohio. In 1977 Joe received the Forrest Gregg Award as NFL’s Top Offensive Lineman.

In 2009 his friend and former team-mate, John Shinsky, asked him for “a favor”. Would he be willing to bicycle 2000 miles from Michigan to Mexico to raise money and awareness for the newly created Shinsky’s orphanage. Joe’s wife Gerri says “did not even like bicycling” …but goodness prevailed and he said “yes” to what turned out to be an eighteen day, 2000 mile bicycle ride with a third former teammate, Eljay Bowron, former Director of the Secret Service.

Today, “Joe D” is instrumental in organizing an annual Golf Outing held in Chicago, to raise badly needed funds for the Shinsky Orphanage, attended by arguably the largest collection of Pro Football Hall of Famers.

In an interview,  Joe D referred to his friend John Shinsky as a “lump of charcoal” that was transformed into a diamond. John Shinsky says, “You can’t find a guy with a bigger heart than Joe D.” ”

“Elvis Grbac is a graduate of Cleveland’s St. Joseph High School and subsequently played quarterback for the University of Michigan under Coaches Bo Schembechler and Gary Moeller. Following a record-setting college career at Michigan, he was drafted by the San Francisco 49ers in 1993 and went on to play 9 seasons in the NFL.

Throughout the span of his football career, Grbac received recognition and many accolades, including being selected for the Pro Bowl and playing on teams that won an AFC West Title and the Super Bowl XXIX Championship.

Elvis now lives in Chagrin Falls, OH with his wife Lori. They have three children. He is currently working towards his Masters in Theology at St. Mary’s Seminary and serves on the Parish Council at Church of the Holy Angels in Chagrin Falls. He also teaches Youth Catechesis.

With all of these great achievements also came sacrifice and failure. Grbac now speaks openly about his American dream, the challenges he’s faced along the way and how he overcame them through faith, hard work and perseverance.

John’s life began as an orphan at Parmadale Orphanage outside of  Cleveland , Ohio. He was placed in a foster home and attended St. Joseph High School
in Cleveland. John received a football scholarship to Michigan State University where he received his Bachelors, Masters, and Doctorate Degrees in General and Special Education, working with children with disabilities.

John was co-captain of the 1974 Michigan State University football team, was selected First Team Academic All-American as a student-athlete, and was given
the President’s Award for leadership, academics, and athletic performance. John has served as an educator for over 45 years as a Special Education teacher, Director of Special  Education, and presently as the Associate Dean in the College of Education at Grand Valley State University, MI.  As a former orphan, John refers to his
placement at Parmadale Orphanage as the foundation from which the most significant project of his life has evolved. John and his wife Cindy have built and currently serve as the co-founders and leaders for the City of Children Shinsky Orphanage in Matamoros, Mexico. John highlights his orphanage work as a means of giving back to those in need, based on the blessings and support he has received throughout his life. While John has achieved many of his goals
in life, his true passion continues to unfold as he strives to touch the lives of abandoned and neglected children, so that they can benefit from the same blessings that John has.

At present, the Shinsky Orphanage has been open for 10 years and has served over 180 children.

An early season misstep at Evangel University MO,  gave the Ravens a wake-up call that sent them to a 10-1 regular season record, a conference championship, and all the way to the NAIA National Championship game in Daytona Beach, Florida. The No. 7 ranked Ravens faced No. 1 Morningside College (Iowa) for the championship, opening the scoring and taking the lead, but ultimately losing a hard-fought game 35-28 with 90 seconds left on the clock.

But that’s not the whole story.

This is the story of what Benedictine College President Stephen D. Minnis called “Mary’s Team.” It is the story of a group of players who attended the president’s Wednesday morning Rosary through the entire season and a quarterback who attended Adoration every Friday before a game. And it went further than that. The college offered daily Mass at the Daytona Beach hotel for the team and fans during Championship Week leading up to the game. Minnis even led his Wednesday Rosary at the hotel that week and led Rosaries each morning while in Daytona. A priest travelled with the team and set up an Adoration Chapel in the hotel on Friday night before the game. Players, parents, fans and even other hotel guests took advantage of the opportunity to pray in the presence of the consecrated host placed in a monstrance.

It was truly a fantastic season.”

As Illinois Attorney General and States’  Attorney, Jim Ryan was a strong advocate for abused women,  children and crime victims. He created the state’s first Health Care Bureau and the nationally recognized Child Advocacy Center, of which there are 30 today. Ryan played a pivotal role in establishing the not-for-profit Illinois Children’s Healthcare Foundation, which provides millions of dollars to improve children’s health.

The State Journal-Register described him as one of the finest Attorneys General in state history, and nearly every newspaper in Illinois has praised his effective stewardship of the office.

Jim’s Catholic faith and experience as a Golden Gloves boxing champion have helped him handle some of life’s roughest blows. He has beat back multiple bouts of non-Hodgkin’s large cell lymphoma cancer. His wife Marie nearly died after suffering a cardiac arrest. Tragically, their youngest child Anne Marie died at the age of 12 due to an undetected brain tumor, and their son Patrick, took his own life. The Ryans endured their tragedies through their faith and by helping others. The annual Annie Ryan Run in Elmhurst has raised hundreds of thousands of dollars for the Midwest Children’s Brain Tumor Center at Advocate Lutheran General Hospital. Their work on behalf of the LOSS (Loving Outreach to Survivors of Suicide) program for Children & Youth at Catholic Charities of the Archdiocese of Chicago which provides care and support for families grieving the loss of loved ones to suicide, has generated more than $2 million to date. Jim has been vocal in speaking out on mental illness, and Jim and Marie have quietly counseled hundreds of families dealing with cancer and other hardships.

The Angels’ battled adversity throughout the championship game. Known for its offense, which averaged over 40 points per game, at halftime the score was 0-0. St. Croix Central scored early in the 3rd quarter making it 7-0. In the 4th quarter, Coach Miller saw the frustration on the boys’ faces and continued to encourage the team saying “Stay focused, keep believing, have faith! We only need to score one time: we’re going for 2 and winning this 8-7.” With 12 seconds left  in the game, the Angels overcame a 2nd and 22 and scored making it 7-6. Going for 2, the Angels lined up, read the defense, and called a timeout. The Angels drew up and executed the perfect 2pt conversion with Da’Shaun Brown scoring untouched and winning the game 8-7. It is believed that all this would not have been possible without a statue of the Blessed Mary with Child standing on the Angels’ sideline! The Dunlap family had offered their beautiful statue to travel with the team for the previous semi-finals game, however, the statue did not make the trip. Miraculously, the morning of the State game, a reminder email popped up on Coach Miller’s computer and, seeing this as a sign, he immediately responded, “YES! Can you bring it to school before the bus leaves for Camp Randell Stadium?’’ The Blessed Mary with Child was then seen by all late in the game on TV as the Angels pulled off one of the greatest victories in WIAA history.

Documents and Images from the 2019 Event 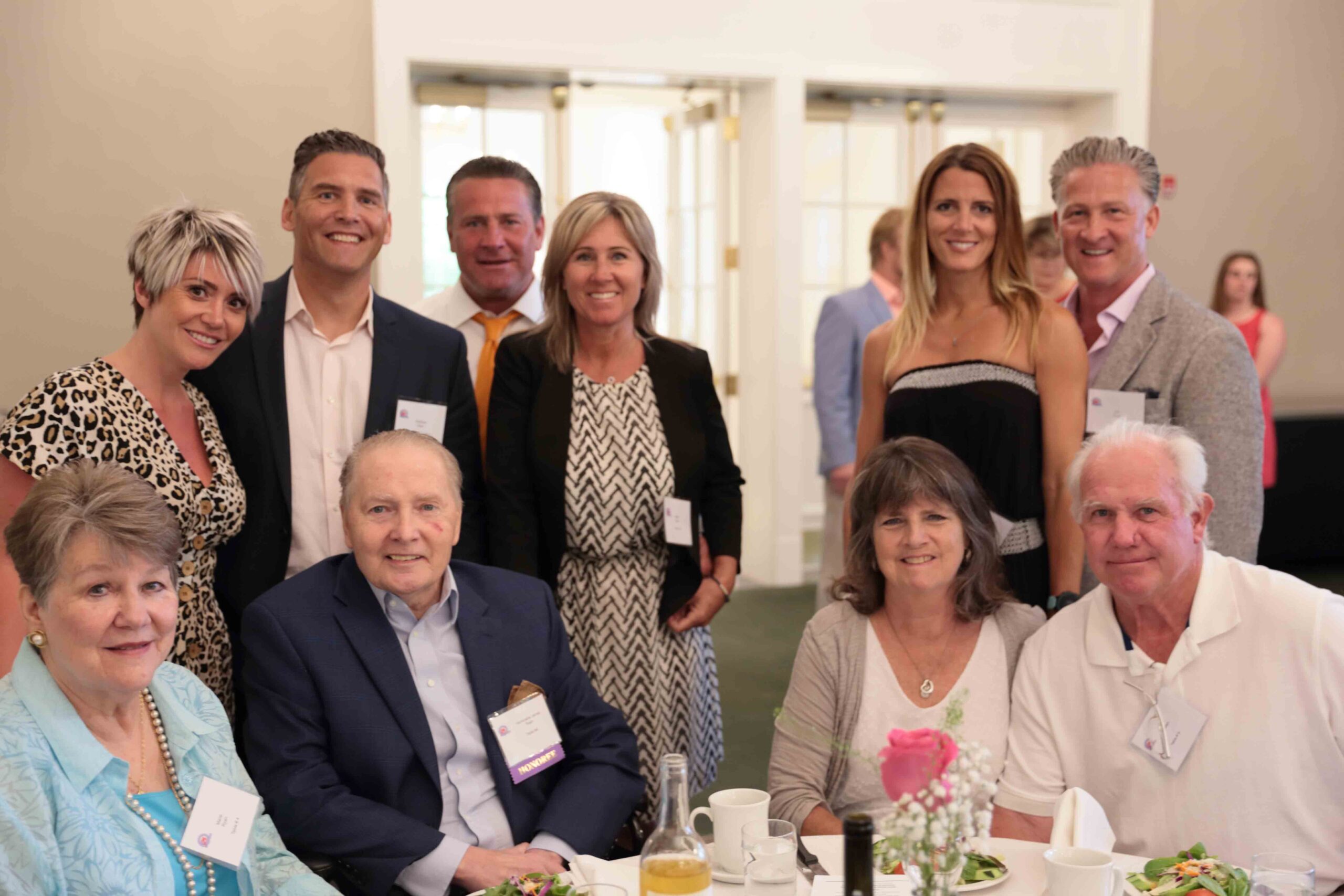 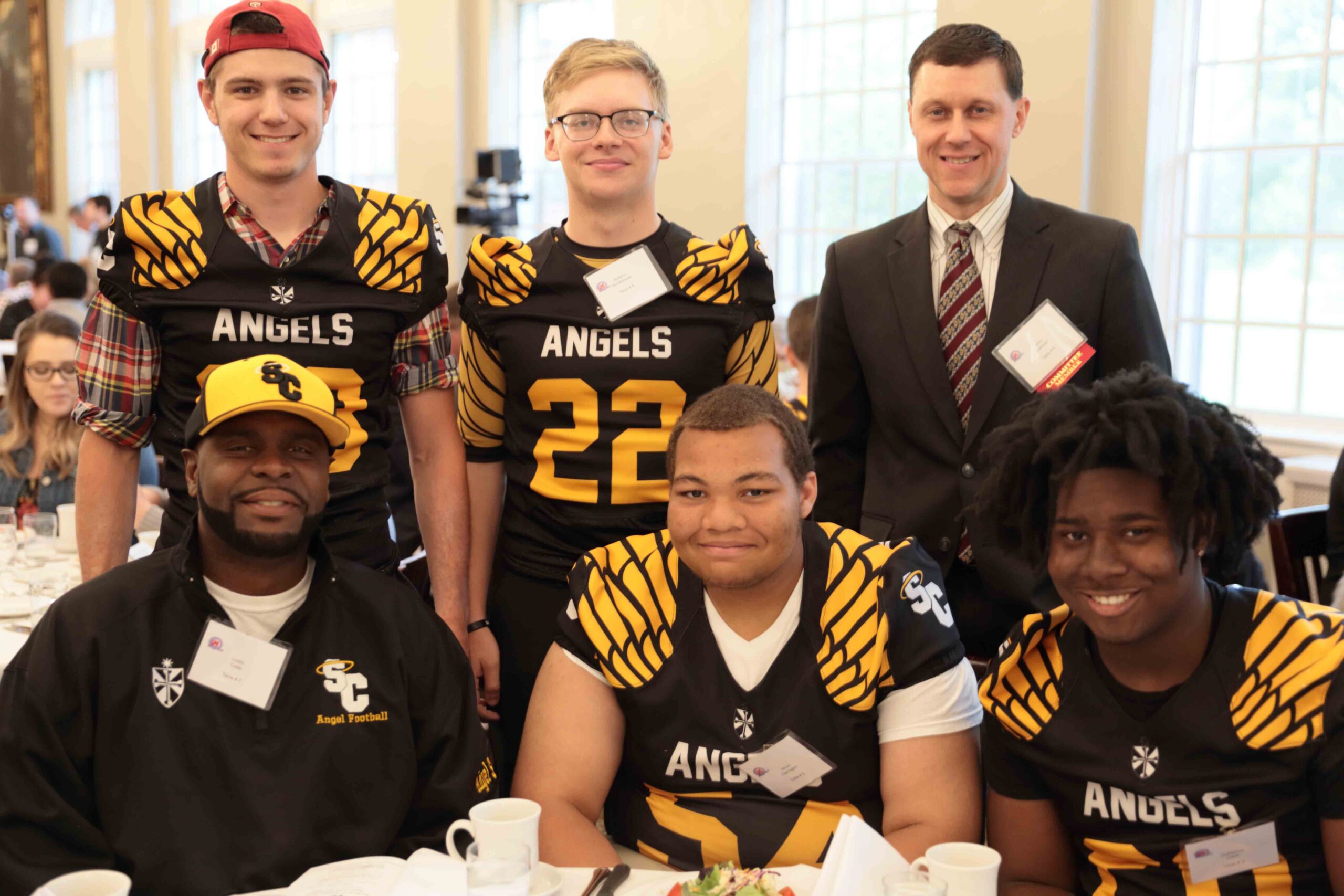 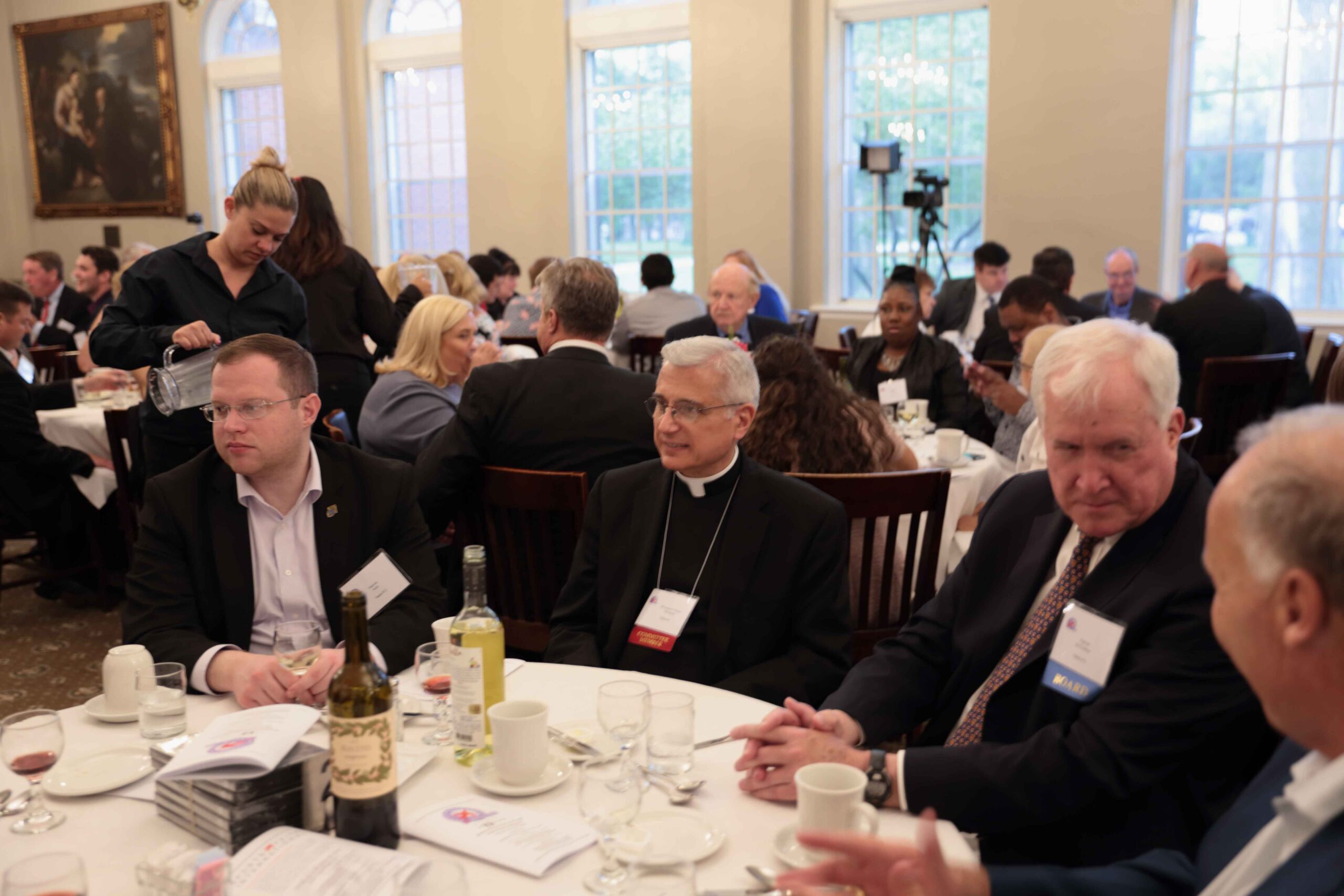 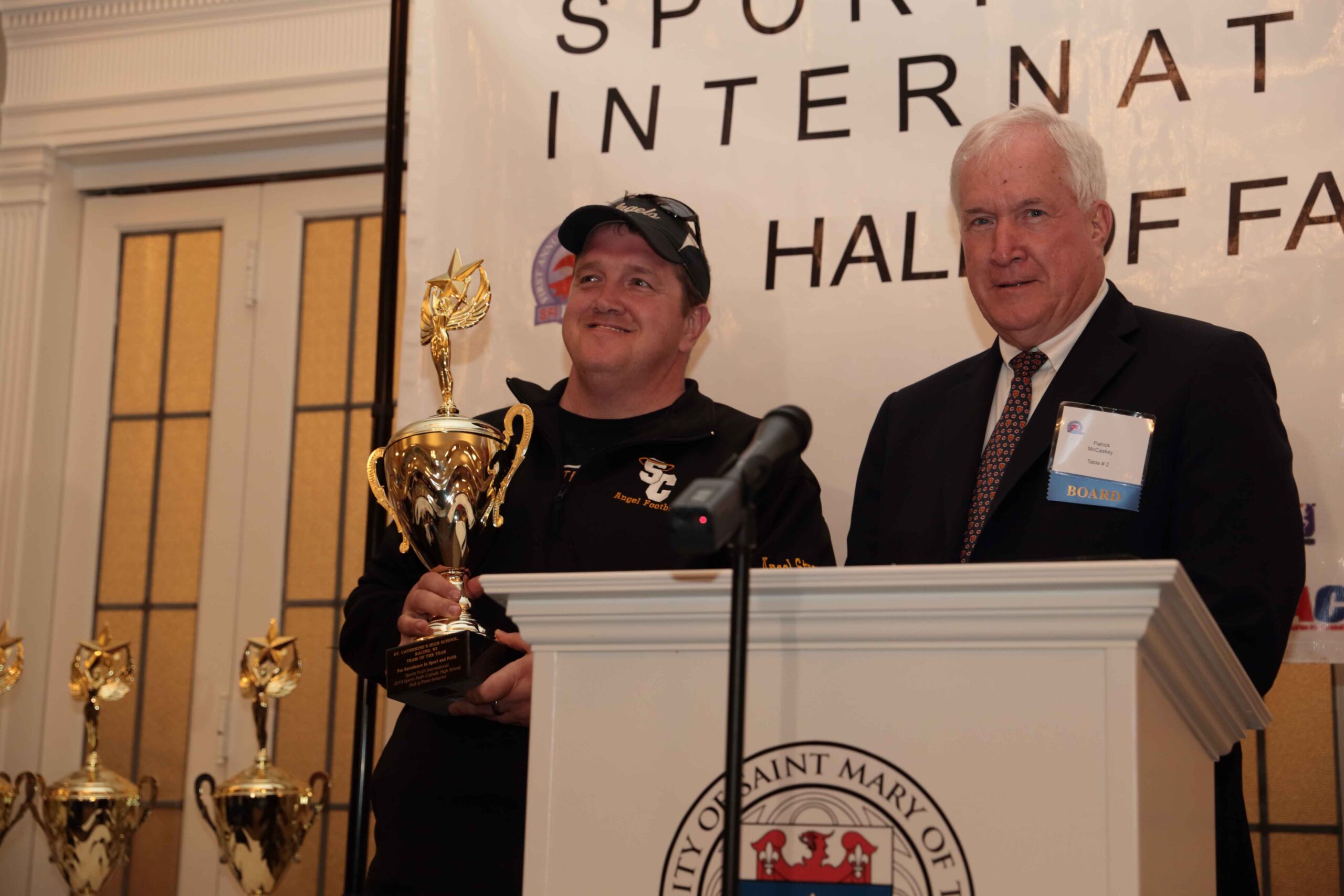 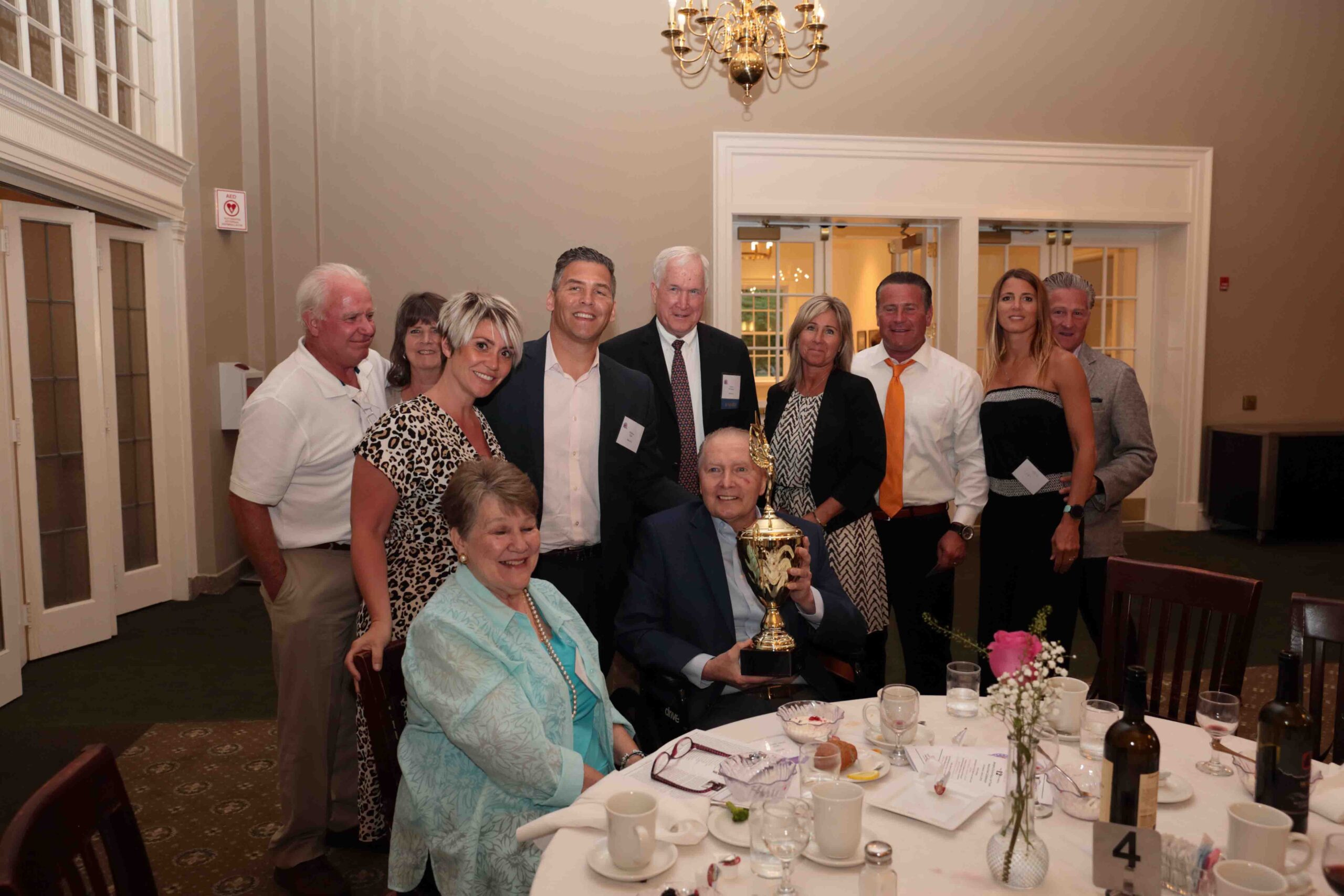 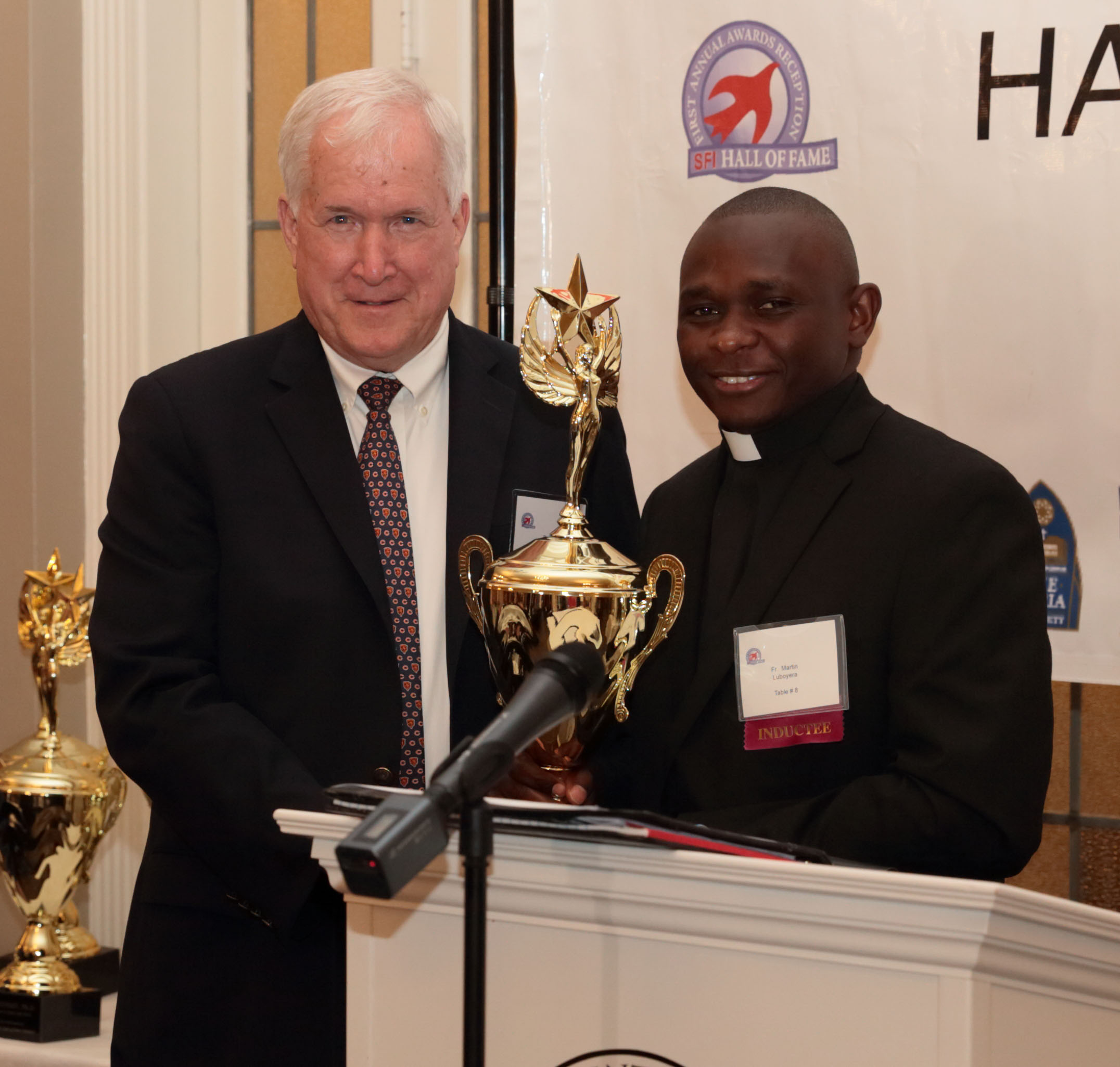 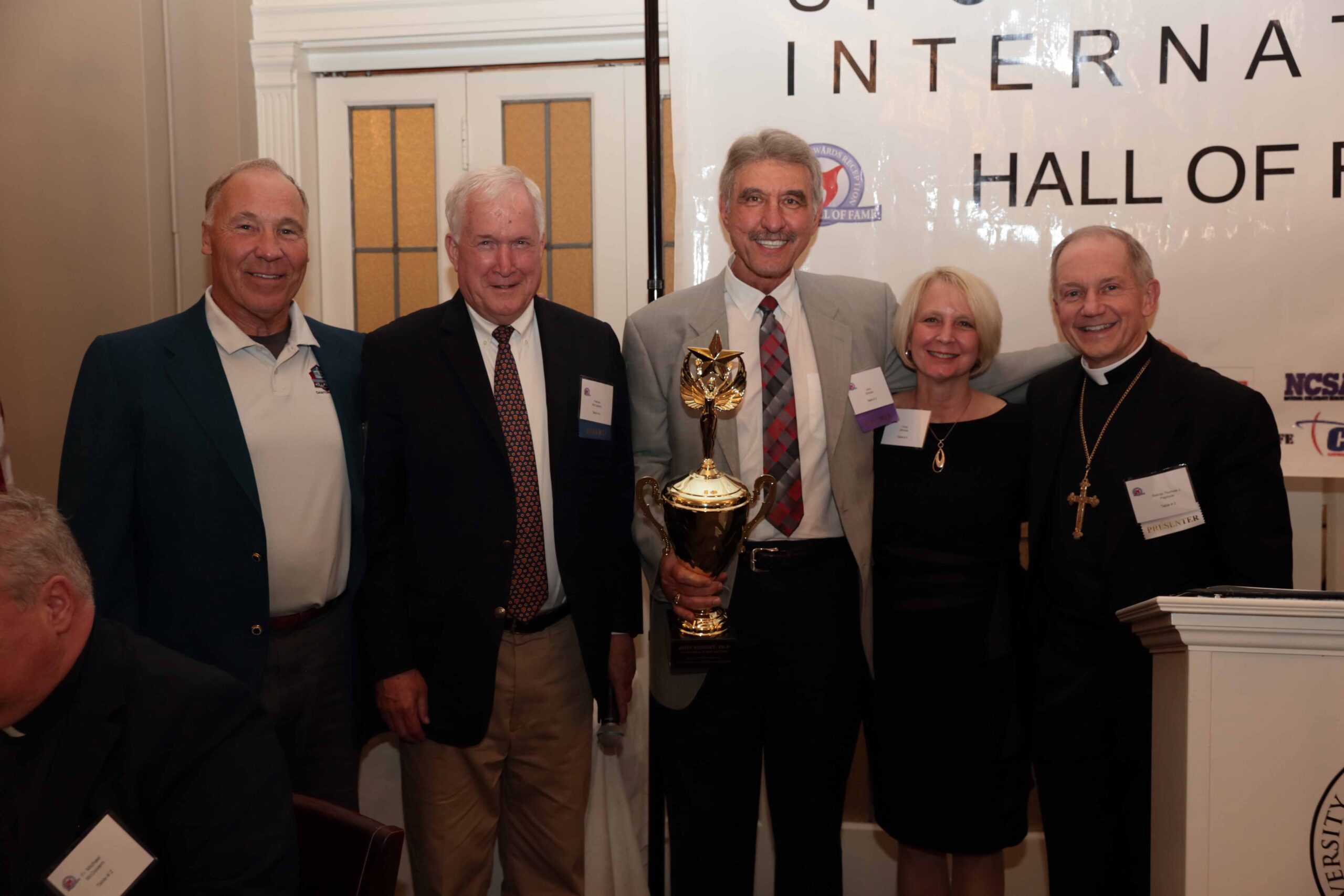 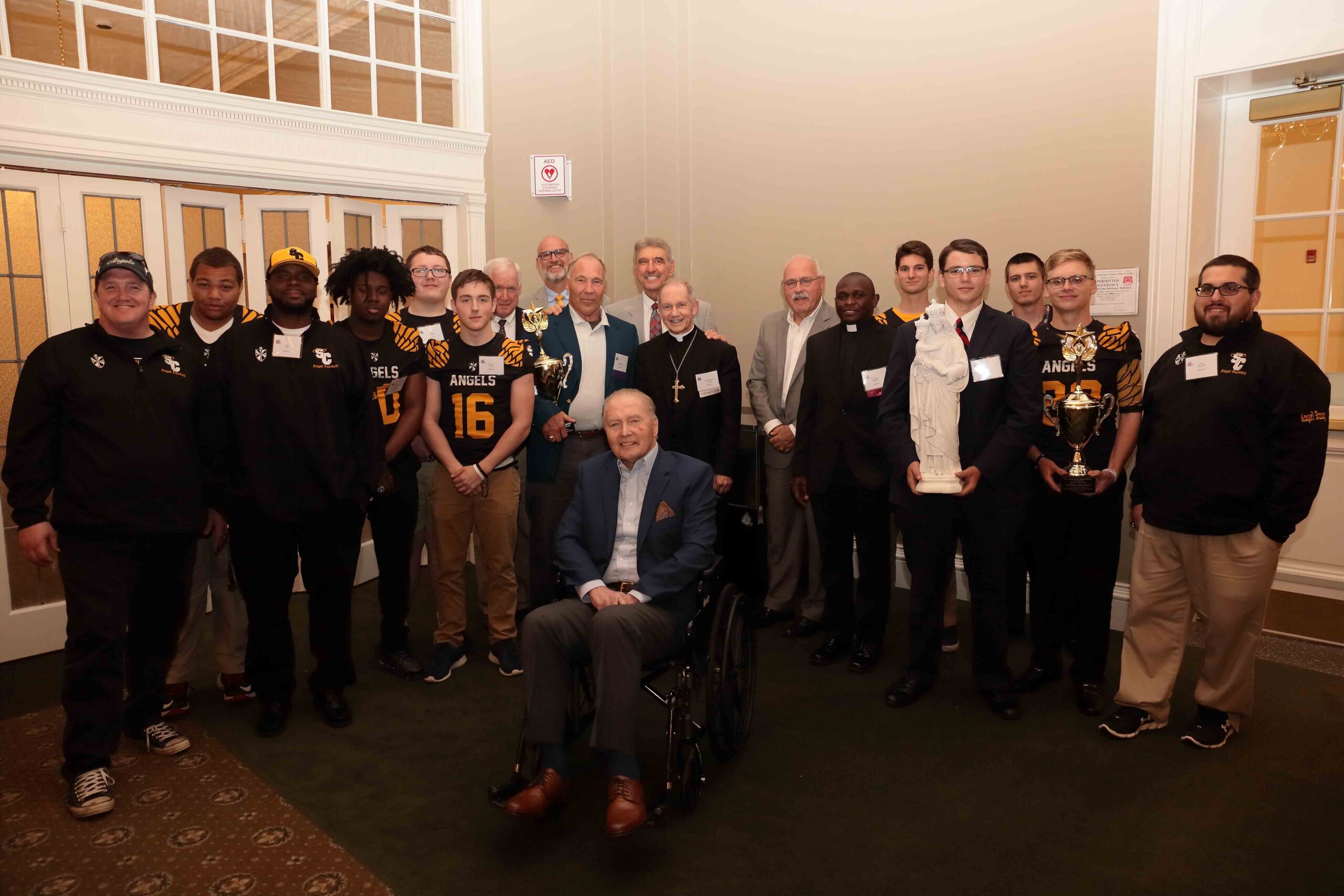 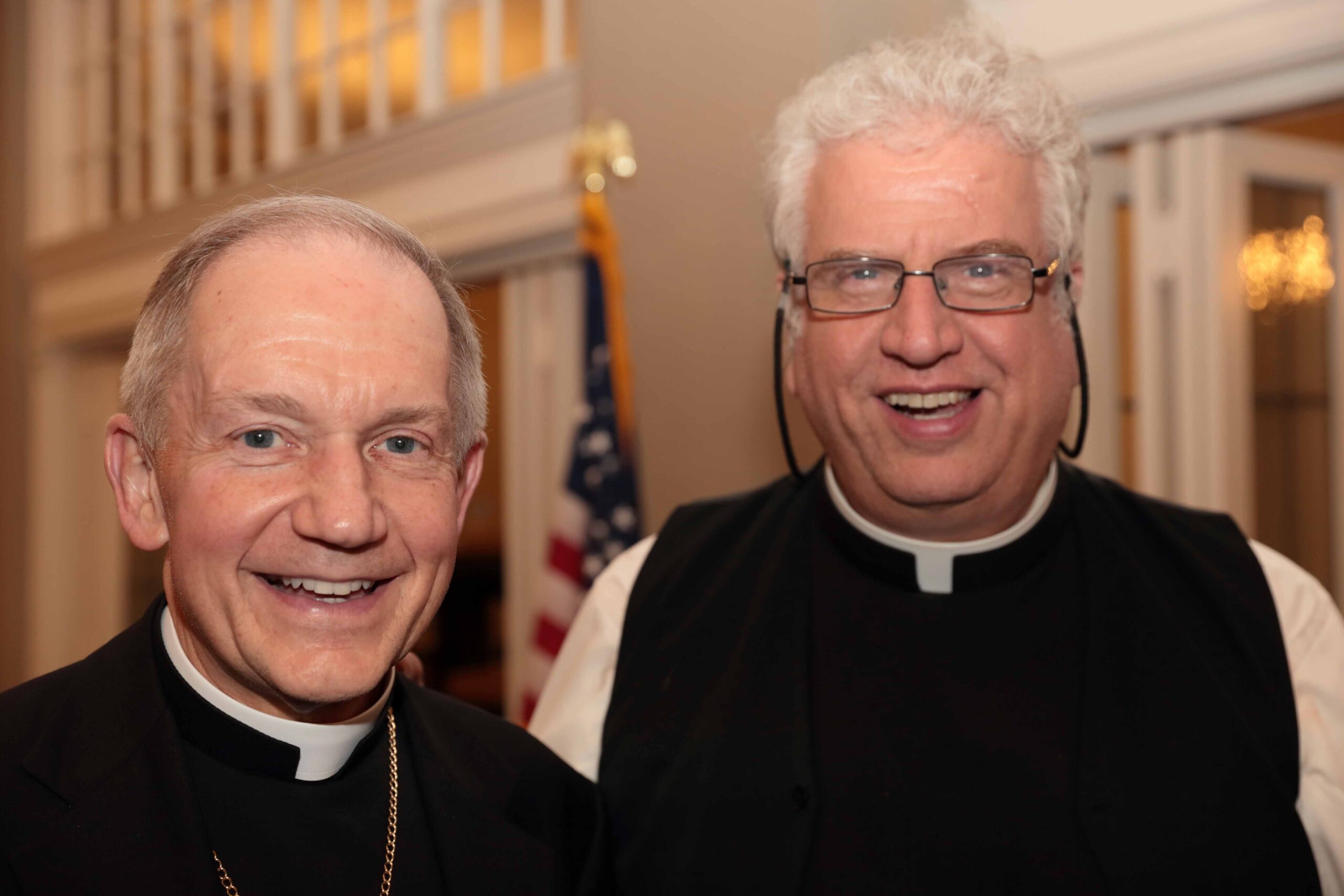 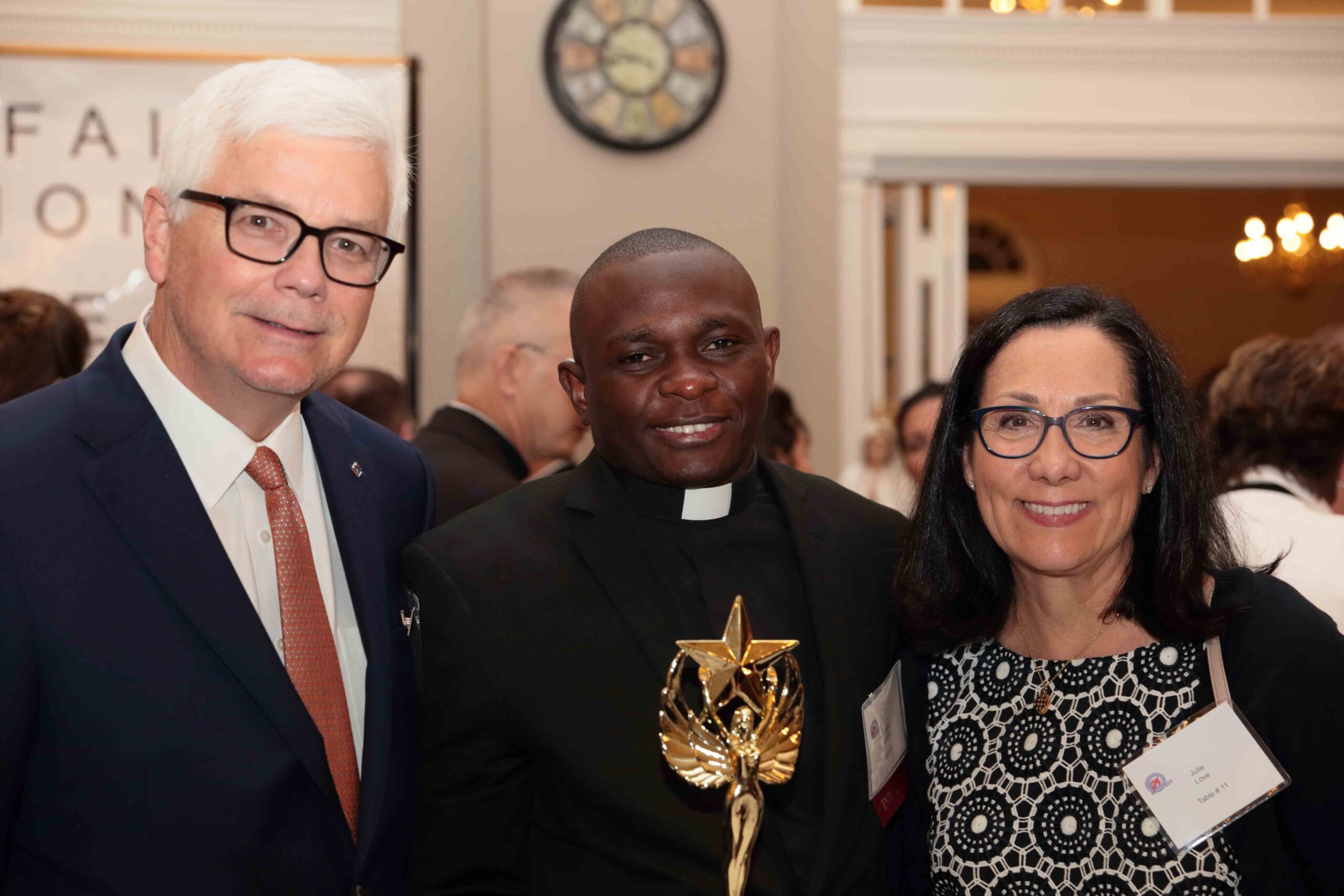